This bill sought to create the Mindanao Railway Corporation that would operate a railway line from Zamboanga to Cagayan de Oro to Davao City, as well as other supporting services to make it a viable venture. This article is divided into the following sections.

Press release for the bill

The principal author Rufus Rodriguez and co-author Maximo Rodriguez issued the following press release on Inquirer.net to drum up support for this bill.

The MRC will operate railroads, tramways, vessels, pipeline and other kinds of land transportation in Mindanao, the lawmakers said in a statement Friday.

The article also featured the following graphic had the railways centered in Cagayan de Oro -- the home city of the bill sponsor. It is worth noting, however, that the bill itself made no mention of a preferred route for the railway or any specifics about feasibility studies for this project. The graphic, therefore, should only be treated as a visualization of a desired outcome, rather than detailed plan. Detailed designs for the railway would have been the responsibility of the implementing agencies under the executive department to pursue.

Note: In the current MRS plan these tracks have been related to Phase 6 to 10 of the project. 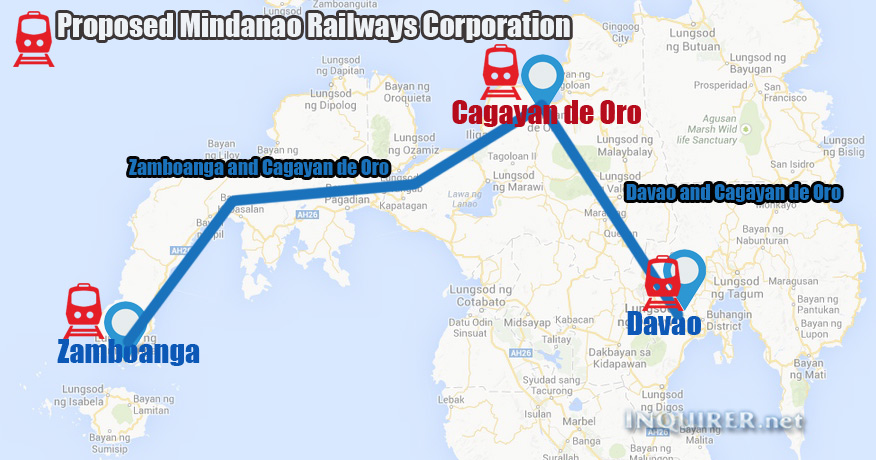 Full Title: AN ACT CREATING THE MINDANAO RAILWAYS CORPORATION PRESCRIBING ITS POWERS, FUNCTIONS AND DUTIES, AND PROVIDING FOR THE NECESSARY FUNDS FOR ITS OPERATION

Bill Status: Pending with the Committee on GOVERNMENT ENTERPRISES AND PRIVATIZATION since 2013-10-14